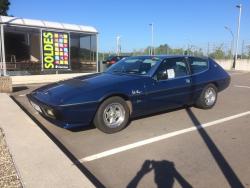 I took pictures of each car individually and will post a collage later on once I've remembered how to do it. It was fantasic to see the Eclat Sprint yesterday; that is certainly the first one I'v

Thanks again Richard for coordinating the display, and it was fun chasing you around the circuit with my rear-view mirror full of Paul's brown car.  Who knew you could get up to 80mph on a few parade