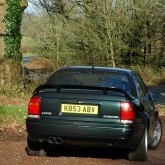 I know its not Lotus but just wanted to let you know the sale of the Lotus Carlton was not in vain, i got something rather decent. Its V12 Vantage S, with a few options.

Yes i totally agree they need to be shown, out on the roads.