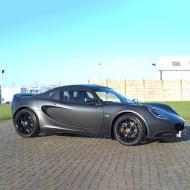 By Hello Paul, November 26, 2019 in Interior/Exterior/Lights/Glass/Alarms/ICE/HVAC/Other