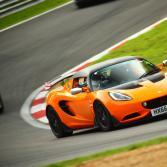 I should be attending this one. In my opinion the best track day of the year.