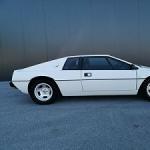 Hi everyone I am new to this forum and this is my first message. As a keen collector of Bond cars, I recently acquired a nice white Lotus Esprit S1 to add to my collection. Although the car is or

Mate, after all the delays I've had for the last 3 months, I'll be playing catchup well into Spring! I do love playing with a nice S1.