Glad to have put a deposit down on the white sports racer recently on Piston heads and Autotrader.  Looking forward to the experience.

It's an amazing car. I'm so glad it's not an ultra low mileage car so I can just use it. It went to North Wales this weekend in horrendus conditions.  The winter tyres provided total security in the w 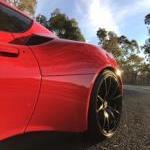