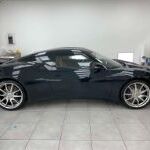 I liked the "Phil's spec" Evora so much, I've just bought one. Wanted something as soft as the NA but with the performance/interior of the S2s and the GT410 delivers that in spades. Seems much quieter

Hi @EGTE, Just went over to Hendy to look at the Emira - persuaded my better half to come along as I'll eventually need her buy-in to getting one and we came away having placed a deposit on your