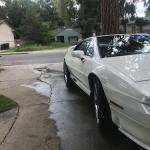 Well, I went to pick up the Lotus, with plans to drive it about 1500 miles home. Everything was working great, until........ Went to Roll the window down, and heard a crack, and the window immedi

Might be worth having a chat with the guy. I’ll PM you tomorrow.