So after chatting with Wayne ref the Vacuum upgrade I decided to rebuild my old units with the Yellow Stuff pads. On stripping down as expected I did find some corrosion on the front of the pisto 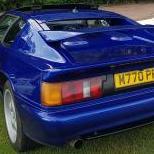 All the colours of the rainbow. Great to see so many Esprits supporting the LGBTQIA community. What colour is your exhaust hanger @Buddsy?