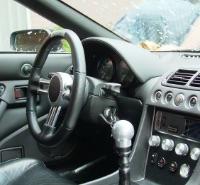 By Ruud Hensbergen,
December 9, 2020 in Engine/Ancilliaries

Hi Mike, I disassembled the fuel pumps and found out that the fuel lines were not tight enough and to my opnion unable to keep the fuel pressure optimal. Temporary I added extra clamps to be "sure" th

suspecting a ruptured fuel line in the tank after both the pumps merge. I ordered a replacement piece of in-tank fuel line from gates, it's a specific part number and you get like 12" of line. I can d