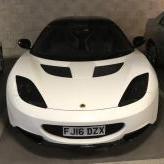 You keep the parking camera functionality, the Alpine shows the silly cones overlay on the camera feed as usual, and the sensors independently beep as they detect objects in range. What you can’t

The parking sensor warnings in the S1 are actually part of the dashboard unit, so sadly can’t be integrated into the Alpine even though it has that ability (if you buy the extra ‘Maestro’ kit). T

Yes I did fit one in my NA Evora not Alpine unit but after market pioneer unit and it worked great.