Exige Cup260 - Restoration and some tweaks 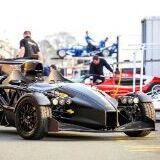 Actual progress... After dropping the car off at Ollies  and after what felt like a lifetime (it wasn’t but anything more than a few hours without the car feels a lifetime)  the car started coming tog

Right a bit of an update, I thought I'd be caught up with the present time by now but I'm still in catch up just writing this up due to work and other stuff Got to be honest, I was gutted I let s