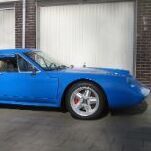 I'm originally from Schilde, so not far from Kapellen. You're most welcome to visit the Workshop for a chat and a pint if you're in the area. 🍻 We should probably continue this via PM, en in

don't need to, we are not hijacking someone's post, it's mine LOL   je hoort nog van me. Rick