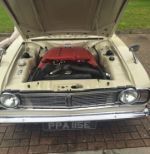 Yep was a bit of luck, an ex colleague of mine called one day and said he was stripping out a warehouse in West London ready for a new tennant and he found a red engine on a pallet on a mezzanine