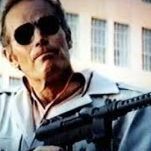 Hi Pete,    No that's fine, I have some bits of metal, I can make one using the old bracket as a guide.    Thanks for your help.  Can't wait to drive it for the first time.

Was that Stevie Wonder? 🙂