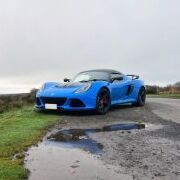 Hey everyone, Thought I'd share some images having been playing around in Photoshop with the paint samples, big thanks to Tom and everyone else for posting millions of pictures. Let me know if yo

Here is a darker version of Nimbus grey, and some pictures with a number plate & silver wheels. Having had a play around, the number plate looks much better on the front attached to the bottom lip

So... green. The blue car was just too bright a starting point to show it anywhere close to accurate. So, I tried starting from an image of the Shadow Grey prototype which turned out much better!