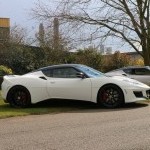 By Frickin_idiot,
February 3 in General Chat

Connectors for a tap, hot/cold, linking tap to the water feed. Flexi connectors. Would be my guess. Justin

If they are flexi connectors for a tap, these sometimes get unused as you can use the existing ones.  I'm no plumber but I run a plumbing company (desk jockey). A bit like Boris, who runs a Party

I'm going to fund an expedition into your brain.