Cyclists and the road

By ramjet,
February 18 in General Chat

So I went for a drive in the Esprit this arvo after work. Did have to go to the painters, but he had left early and I missed him. Oh well, a drive it is then. So I'm driving along a bit of road a 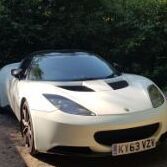 I do cycle, usually off road but I do cycle on the road to get where I'm going at times. When I cycle though I will pull over occasionally to let cars past which makes my journey a lot less stressful.