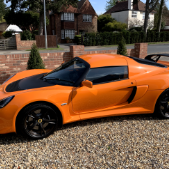 Hi All, This is my first post on TLF since becoming a Lotus owner and forum member ~5 months ago. As a first-time owner I've already got a huge amount of value from the forums so I thought I