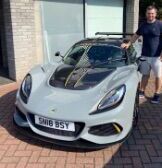 Nice! How long did the job take all in?

That's surprisingly quick to be honest!