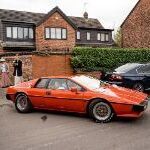 Thank you so much for looking Andy - it is very much appreciated - I would like to see this cave of lotus delights on day - let me know if anything does turn up!... And yes, I am already funding a spe

Have you totted up the cost of all this? I can imagine it's gonna be one huge bill, so my question would be - is it actually worth the outlay?