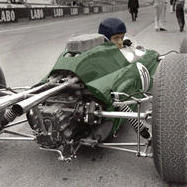 Peter Stevens gave an interesting talk at Brooklands this week. He showed images of a couple of Lotus mid-engined projects, which he referred to as “M200” and “M300”. The silver “M200” (whic

It was great. That was the 50000th Lotus along side your V8. Peter signed the handbook, which was already signed by Prince Charles now King Charles. He also signed my Mc F1 memorabilia. 🙂 X1

Sorry I didn't get a chance to meet you, @jep. Lovely M100 Peter certainly did a lot of signing that evening!