By Esprit79
November 10, 2013 in Gearchange/Gearbox/Clutch

My crome gearlever snapped off a year ago. My dad made me a new one on his lathe . Everything is fine since then.   some pictures of the new one and the broken one besides. 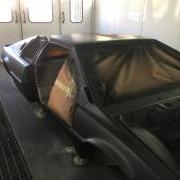 I think you have bought the assembly for the S3 car with the 8mm thread size, the parts are the same as are for the citroen c35 box so no problem swapping them. Giorgio

My chrome gearlever snapped off like a carrot years and years ago. The black lever seemed to be the standard replacement...the original walnut knob was used, modified to fit and locked in place with a