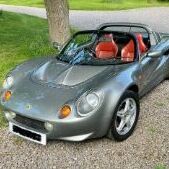 By Beady
February 18, 2014 in Interior/Exterior/Lights/Glass/Alarms/ICE/HVAC/Other

My evora has this issue too it seems. I don't fancy replacing it with the alpine one though. The quality is nothing special and its expensive.I get the feeling they set the price 10 years ago and ha

Long as the headunit is ok with it yeh.. Pretty much any double din stereo has a composite in. Not sure if the standard bumper has the gap between the plate lights but it probably has. This seems

Hi All, My camera is still playing up when it gets wet (not pressure washer, just rainfall) and I think it needs to be replaced. I don't particularly want to pay the Lotus inflated price for the