Car cutting out, tach all over the shop

By soldave
November 1, 2014 in Engine & Ancilliaries/Gearbox 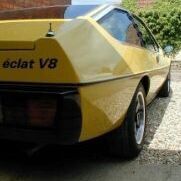 you've lost ignition whilst the engine was running.   If there is no ignition, the engine continues to draw fuel unless its at idle when the ignition stops. when you then start it, it backfires.

Next time check the coil, if it's too hot to touch it needs replacing :-)

Not if you mark its position with a narrow line of paint when you withdraw it.   As your on points, you can also set the timing statically using a couple of wires and a small 12v bulb. A google sear