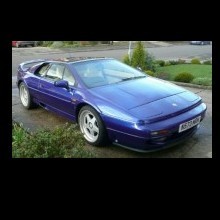 Dear Richard, I'm looking to hire a Lotus Esprit to feature in a television programme. Please get back to me ASAP. Kind regards, J.Clarkson.