Evora journey at an end for me 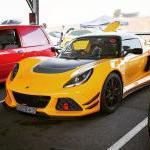 That's the bit where the 4-series falls over a bit imo. For normal stuff, it does not drive as well as a Hyundai i30 or Holden/Chevrolet Cruze.   That said, if you are absolutely fixated on getting

I sold my Evora S via SOR at Lotus Silverstone. Nice and simple process , with car selling quickly and returning a price that I reckon I would have struggled to achieve privately.