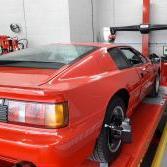 Out one evening getting amorous with my fiancé in my old Hillman Avenger. Eventually things calmed down and she couldn't find her knickers. There was no light in the car, no phones obviously and we we

Don't even remember which car as it was years ago but, left the house and drove down the road- went to brake for a junction and couldn't move my foot AT ALL. Panic - left foot braking and a clumsy sta

Here's one that made me smile from Saturday. My daily car gets a lot of sudden braking practice and many pupils leave their open bags on the back seat, which then ends up on the floor and upon my week