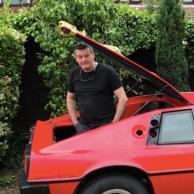 By Mariner,
July 28, 2015 in Misc including parts cross references

One of the jobs forced upon me was to effect repairs following a small engine fire. I'd had the car for a short while and not many miles and yes there are many jobs to do....one of which a flexible fu

Hi Chris, Yes I should have uploaded some before now so apologies for that so now making up for it, attached a few pics and a short video clip will follow shortly of the car running taken last mo