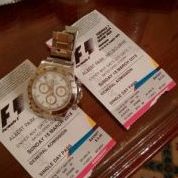 Hi Laurence, a stock Elise is not going to snap your neck in a straight line but it might round corners. If you thought it cornered well in the wet, wait till you try it in the dry on good tyres!

Just keep your brain engaged and you'll be fine. If it's slippery out there, as it's likely to be in January, then just take it easy. With an S1 you can get into a slide by coming sharply off t