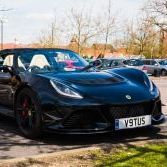 By Kalli,
March 21, 2016 in Ride/Handling/Suspension/Brakes/Wheels/Tyres

Seriously.....go outside look at the car and have a word with yourself....:)

So I guess that means it's worth the extra £40 per tyre over the standard non-LS ones?

Wait 'til you get my consultancy bill*! *Keeping you from understeering into some bushes was free btw