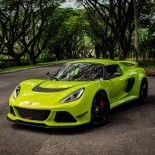 Hello, it's finally here after 6 months.