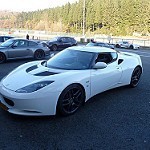 By daniel_2811,
January 15, 2017 in Interior/Exterior/Lights/Glass/Alarms/ICE/HVAC/Other

It seems that there was an issue in the earlier versions of the early latch mechanism that would cause the interior door pull lever to detach from the unit.  I believe from reading the 2011/26 campaig

I still have my old latch which went faulty, so just checked it out of curiosity. I can confirm that mine also had a crack in the same place. Something tells me that you shouldn't shut the Evora'