So after @JayEmm mentioned he changed his air filter to a K&N in his Evora 400 with positive results, I thought I would do the same. Its not difficult but its not simple either, so thought I wou 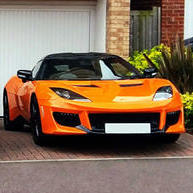 I got around to fitting this today. Admiral cared from the point of view that they wanted it declared, but they didn't charge me for it. First thoughts: Good lord, with the passenger window down

I purchased a new Evora 400 this week in the US and of course decided to replace the air cleaner with a K&N, the procedure is as described here in the thread, though the airbox could be pulled a b