This Could Get Interesting... A GT4 Journey 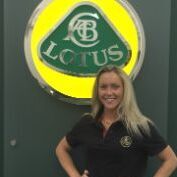 My thoughts exactly....  Lost for words.

I've just been sick in my mouth....... my utmost condolences to you both