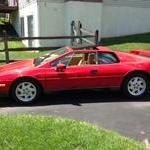 Well that was the most fun I’ve had on a garage floor with a Dremel since that one time on the Strip in Vegas!  I can apply to be a member of the Braided Clutch Line club, and all my grommets are back

When I installed a braided clutch hose on my 1990 Turbo SE, I needed either an adaptor to suit, or I had to drill and cut thread in the clutch master. I chose the later, as it's one link lesser, one s