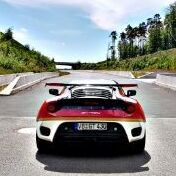 This is my new Evora GT 430 with special painting ( Gold Leaf) by hethel factory. The car is waiting for me at Komo Tec Germany. You can see the car this weekend in the KOMO-TEC Box in Nürburg /N

Thanks @Bibs and all.   What a feeling.  And it will be the only time in my life I am customer #1!   More pics and thoughts to follow.  But I can say this is a special car, very special.