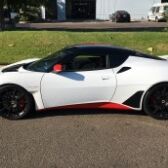 heres the bad transistor being tested with a LED in place of a coil, it's not supposed to stay on cause that would be overDwell     All fixed up

What if I told you guys my popping could be attributed to a simple ignition misfire? Chain of events otherwise known as "the demise of my ignition system" ECU repaired previously for unknown

turned out to be true in my case.  2 missing nuts, 1 sheered off stud.