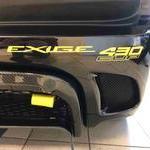 Here she is! Delivered today!e

Well...I ordered one! Love the looks and I buy a car if it turns me on (and I can afford it!). All this talk ignores one's personal preferences.