So, the first track day of the year in the 3-Eleven at Castle Combe with 'Lotus on Track' last week did not start well: having returned home the night before the track day after a long business trip I

Yep, when a lotus dash shows low fuel, it’s defintely low   .  On a track day at Silverstone in my first V6 Exige the light for low fuel came on, so I came off and went to go to local garage and ran o 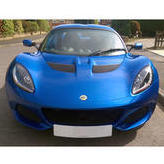 Really looking forward to seeing your car on and off the track on the 10th. I also expect to see it lapping me several times in a session 😎