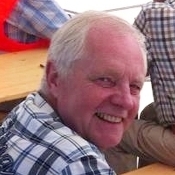 there is a connection block for the + wires (+ from battery connecting to 3 or 4 other wires including to the starter moter)   inside the left rear wheelarch. I have seen that connection getting loo