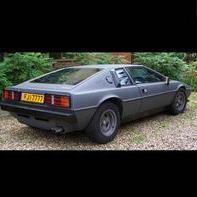 Recently changed the Cam (timing) belt on my Lotus Esprit S2 (1978) as I realised that the belt had been on the car for nearly 10 years, even though it has probably done about 1000 miles in that time.

Here is a pic of the new belt with arrows pointing to the front of the engine. I dug the old lotus supplied belt out of the bin and there are no direction markings, however the text would be the right

Crank pulley is front.  Adjacent spark plug is no 1.