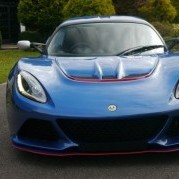 I never normally let my car get too low on fuel but I was driving back from a meeting in my 400, fuel was getting very low but I knew where I was filling up so not a problem...or so I thought!  Pulled