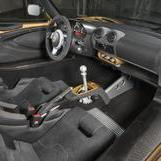 Got my car today, trying to think of a good or funny name... Mrs noticed the plaque " built by Carl Knights" so, the car is called Carl now   First planned mod is to change the steeri

I'm so happy to be typing these words out. After about 2 years of back and forth I finally decided to treat myself and the Exige to some Tilletts. This is all @GFWilliams's fault. I met up with him an