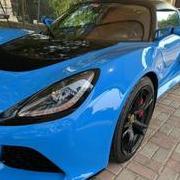 Many people believe that Mustang dynos read lower than DynoJet units -- comparing RWHP numbers measured on different dynos (even the same style of dyno) and under different conditions (ambient temps,