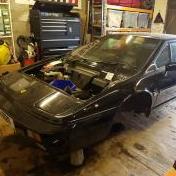 So, after deleting a metric fucktonne of stuff off my PS4 (yes, I have an external drive) to make room for the update file (a three hour download and I have north of 50 mbps download speed), I had pri

Loads of updates now mean there are people again in Apalachia. Now its more like the old Fallouts and is a huge improvement. You can even get "Allies" old NPC's.  Well worth a revisit if you have

I went back onto fallout just after the update, a lot better than it was. Has made the lockdown a bit more bearable haha