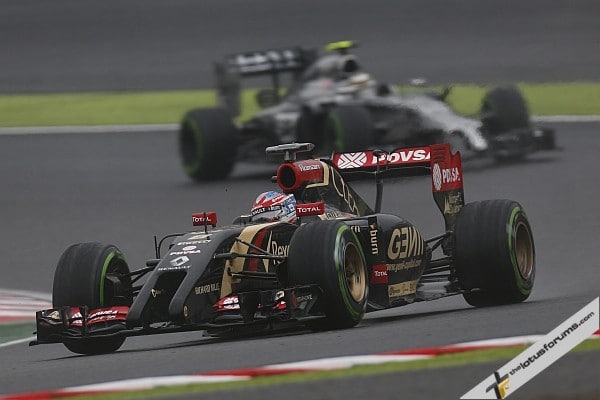 Romain Grosjean finished fifteenth and Pastor Maldonado sixteenth after an eventful wet weather Japanese Grand Prix at Suzuka. The race started and finished behind the safety car, with two red flags, the first after two laps and the second finishing the race eleven laps early.

Romain Grosjean, P15, E22-03
“Firstly, my thoughts are with Jules and I hope he is not seriously hurt. It was a difficult race out there. The start under the safety car was in very wet conditions when the spray made it difficult to see and the amount of water on track meant we were aquaplaning a lot, so it was sensible to red flag the race. After the restart, conditions were much better, but then the rain returned and it was difficult to be on the right tyres and find the grip we wanted. The car seemed quite good at times but we also used up our tyres quite quickly, so it was a big challenge today.”

Pastor Maldonado, P16, E22-02
“It was a tricky race from the very beginning. I think we were doing quite well, trying to anticipate what others would do strategy-wise, and we recovered some places. There was a big battle at the back, quite tricky because the visibility was not so good. We were able to make some good moves, but equally you had to be very careful about where to push. Most importantly, my thoughts and prayers are with Jules tonight, I hope he is okay.”

Federico Gastaldi, Deputy Team Principal
“Obviously everyone in the team is concerned about Jules Bianchi and our thoughts are with him, his team and his family. We know the medical personnel will do everything he needs. The race took place under difficult weather conditions so it was a challenge for everyone. In terms of our performance, both drivers drove very well under very trying circumstances to bring both cars home after numerous visits to the pits.”

Alan Permane, Trackside Operations Director
“It was a very, very difficult race for everyone between safety cars, a lot of incidents and a couple of serious accidents. The most important thing right now is Jules Bianchi’s condition and we all hope he is okay. Our performance was quite affected by the weather conditions and we were losing grip from the intermediate tyres quite rapidly which is something we have to analyse in case of another wet race.”

Simon Rebreyend, Renault Sport F1 track support leader
“The results were as good as we could have hoped for considering the grid positions, although in these conditions you always hope for opportunities to improve. We gave both drivers the maximum we could on the Power Units and Pastor did a good job to move up from the back of the grid. Unfortunately we will also take a hit on the grid in Russia so the task now will be to prepare as much as we can and minimize the impact. Naturally we are all thinking of Jules Bianchi however and hope for good news soon.”