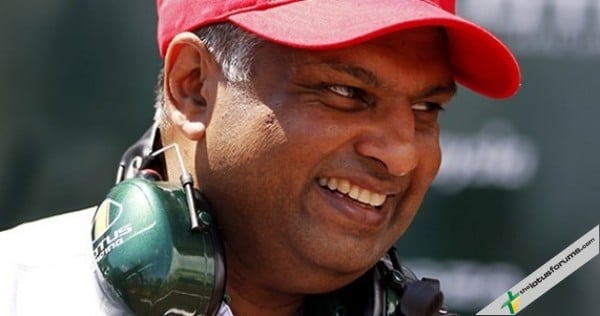 There are two sides to the world of Formula One. On the one hand it is a remarkable amount of fun, think back to some of the classic wheel to wheel racing in recent years between Button, Alonso, Hamilton and Vettel. This is supported by the comedic side of the sport with Ron Dennis cutting Eddie Jordan’s headphones with a scissors during the British Grand Prix this year and Nigel Mansell appearing alongside Iranian comedian Omid Djalili in Moneysupermarket car insurance advertisements.

However, the opposing side of the sport can be rather dark. This doesn’t just mean the fatalities suffered but also the business transactions, with many people having lost jobs from the sport in recent years due to budget cuts. The business world is naturally cut-throat and this is perfectly demonstrated by the current dispute over the use of the name ‘Lotus’ in 2011.

At this point it might be wise to have a brief re-cap of this rather confusing situation. Tony Fernandes announced plans to enter an F1 team into the 2010 world championship back in September 2009. He sought the permission of the Proton Car Company (who own Lotus Cars) to use the Lotus name, which they gladly gave as their new CEO Dany Bahar had a history in the sport and was planning on entering them into F1 when their financial situation permitted it.

The team quickly became a hit with fans as they established themselves as the best of the newcomers and a credible continuation of the Lotus name in the sport. Fernandes revelled in this acclaim; organising event such as the Lotus celebration in Norwich this year which included the classic ‘Team Lotus’ cars which won championships in the 1960s and 1970s as well as Fernandes’s 2010 challenger. In an attempt to strengthen his teams bonds to the original Lotus team further, Fernandes announced that he had bought the rights to the name ‘Team Lotus’ from David Hunt (who owned the team when it collapsed in 1994) and would therefore no longer require the permission of Proton to use the name Lotus because ‘Lotus Cars’ and ‘Team Lotus’ had always been separate companies.

This claim disputed by Dany Bahar, who claimed that both ‘Lotus Cars’ and ‘Team Lotus’ were division of a company called ‘Group Lotus’ which Proton now owned. Bahar therefore decided to take legal action to stop Fernandes using the name.

Bahar forces Fernandes into a corner

It appears that Bahar began to doubt that his legal action would be successful as he opened negotiations with Renault about buying their 25% shareholding in their own F1 team whose majority shareholder is investment group Genii Capital.

Genii Capital are reported to have grown frustrated with Renault’s lack of financial investment in 2010 as they sought to scale back their financial investment in the sport. Renault was harbouring an ambition to withdraw from team ownership and instead supply engines to a greater number of F1 team and increase their sponsorship of constructors champions Red Bull. Renault believed that this would give them greater publicity at a fraction of the cost. Proton are believed to told Genii Capital they were willing to invest $30 million in funding each year and by buying these shares it would allow Renault to pursue their new marketing strategy.

However, it is alleged that Proton’s only condition to the purchase of the shares was that Renault had to stipulate in its proposed contract to supply engines to Fernandes team for 2011 that Fernandes could not use the Lotus name. At this point Fernandes’s team were a long way into the design of their 2011 car which was based around the Renault engine and they had already paid a substantial amount to Cosworth to remove themselves from a contract two years early. It appeared that Fernandes simply had no option but to surrender the Lotus name regardless of his legal rights to use it and Genii Capital prepared to re-name its team ‘Lotus Renault’ for 2011.

Just prior to the season ending Abu Dhabi grand prix, Fernandes announced the start of a competition on his team’s website where fans could design their 2011 livery. Significantly the colour scheme entrants have to adhere to is ‘black and gold’, which is of course the colour of the classic JPS Lotus cars of the 1970s and 1980s. This was the first hint that Fernandes was not done with the Lotus name yet.

Two weeks after the end of the season and there had still not been any announcement from Proton that they would be buying into the Renault F1 team despite a number of F1 insiders believing that the deal was already done. This began to arouse suspicions that something was wrong with the assumption being that Genii Capital was having trouble persuading the other teams to give them permission to change their name. As part of F1’s commercial agreement between the teams, the other top teams would have to unanimously support the proposed name change because otherwise the team would forfeit their prize money for the previous season (rumoured to be in the area of $50 million) as they would be classed as a new entrant. This is the reason why the Sauber F1 team continued with the ‘BMW Sauber’ moniker in 2010 despite the German manufacturer having sold the team back to its founder Peter Sauber at the end of the 2009 season. This was becoming increasingly problematic with the FIA planning on releasing an entry list for the 2011 season on the 30th November.

When the FIA released the list it revealed that Fernandes had defiantly announced his intention to enter 2011 with the name ‘Team Lotus’, while Genii Capital appears to have failed in its initial attempts to drop the ‘Renault F1’ name. Fernandes immediately backed up the FIA release with an announcement on Twitter that he had made the call to stick with the ‘Team Lotus’ name after “tremendous support from the public”, and stated that he was expecting “many battles ahead”. This was perhaps a reference to the fact that a number of legal battles are likely in the coming year.

“Team Lotus it is”- Fernandes

The FIA entry list is incredibly significant as it shows that Fernandes has somehow managed to completely turn the tables on Bahar. It should be noted that it is doubtful that F1 chairman Bernie Ecclestone would have allowed Fernandes to enter as ‘Team Lotus’ unless he was certain that the team had a legal right to do so. It is also unlikely that Fernandes would have applied for entry with that name without the permission of the Malaysian government who have been keeping a close eye on the situation at the same time as calling for both companies to maintain a united front.

It now appears that Fernandes’s team WILL start 2011 as ‘Team Lotus’ and this leaves Proton in a difficult situation if they really have agreed to buy shares in the Renault F1 team. The car manufacturer had already faced criticism for its intention to follow the more expensive route in setting up a team separate from Fernandes as the Lotus Car Company still relies on Malaysian tax payer’s money to remain afloat. Additionally it remains to be seen what action Renault will take if Fernandes has violated the terms of their contract.

It could be that Renault has actually violated a clause in its agreement with Proton in failing to force Fernandes into dropping the Lotus name. If this is the case, Bahar may have a get out of jail free card which would allow him to withdraw his commitment to the Renault F1 team and it is then doubtful that Renault would be willing to forfeit the $15 millions due to them from Fernandes in exchange for a supply of engines. It’s all fascinating stuff which isn’t over yet.