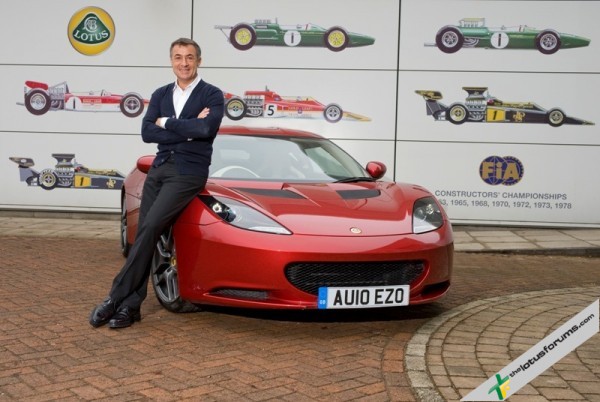 As part of your role as F1 ambassador for Group Lotus you attended the Grand Prix in Malaysia – how exciting was it to see Nick finish on the podium?

Jean Alesi: Of course it was fantastic. I was extremely proud. Nick did a fantastic job, but it was also an important result for us as a team. So many people believed that the result in Australia was down to pure luck or that the track was simply more in our favour, but the result in Malaysia proved them wrong. We have a seriously fast, competitive car.

You were in the middle of the action in the garage and you were able to observe the team at close quarters throughout the race weekend – what’s your general impression?

Jean Alesi: They are a collection of professional, talented and dedicated individuals who come together to form a fantastic team. During the test sessions, qualifying and the race there was nothing but complete focus in the garage. I had a headset that allowed me to listen to the engineers as they communicated with both drivers and each time they spoke it was exactly at the right time and with perfect information. The way the team operates is flawless.

Lots of people have joked that Vitaly made full use of his aero package during the race – from a driver’s perspective, what can you tell us about the incident?

Jean Alesi: Vitaly made a small error, he went offline and picked up a lot tyre rubber debris which then caused him to further deviate from the racing line and resulted in his incident. It was very hard for him and he was very frustrated but it can happen to anyone, I think next year you won’t see anything like as much debris on the track in Malaysia. The most important thing is that he is fine, he was checked afterwards and I’m told that he got the all clear. On a positive note, Vitaly’s performance during qualifying and the start and mid section of the Grand Prix was fantastic, I think there’s a lot more to come from him.

What can we look forward to from the race in China?

Jean Alesi: Another great performance hopefully and an exciting race. I don’t think there will be much variation on the car set-up for China, the challenge we will have there is the tyres, the temperature will be much cooler so we’ll have to wait and see what will work best there.

In principal, how do drivers feel about back to back races?

Jean Alesi: If you have a great result like Nick then it’s nice to have the time off to celebrate, rest and recover but if like Vitaly, you have a frustrating race, then you can’t wait to get back out there and show what you can do!