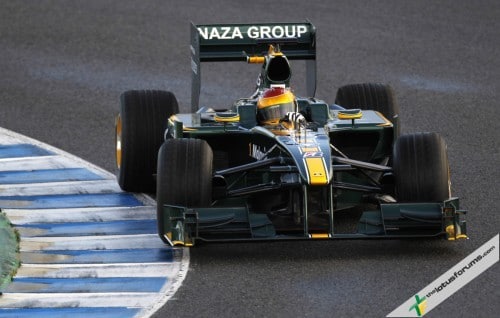 Photographers for Autosport spotted the Lotus F1 entry undergoing shakedown testing at Silverstone on Tuesday. The car, in traditional Lotus colours of BRG and yellow was only started for the first time 3 days beforehand and is due to be officially launched on Friday the 12th February in London.
Lotus have raced cars in Formula One with this colour scheme since they first entered in 1958 with Graham Hill behind the wheel of a Lotus 16 and the choice of colours is a significant knod to the heritage that the new team must live up to and that they clearly respect, great news for all Lotus fans worldwide.

TLF are attending the official launch later this week at the Royal Horticultural Halls in London, news and exclusive pictures will be published immediately after the event. 2010 looks like it will potentially be a great season for Lotus and Formula One, we’ll be bringing you all the news direct from the team.

The original Autosport article can be found here.